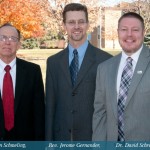 This year there were two presenters. The first lecture was given by Rev. Jerome Gernander, pastor of Bethany Lutheran Church in Princeton, Minnesota. The second presenter was Dr. David Schroeder, a professor of history at Martin Luther College in New Ulm, Minnesota. The theme of the lectures was “Lessons from the Laypeople of the Reformation.” The first lecture, given by Rev. Gernander, was entitled “Laypeople of the Reformation.” The second lecture, presented by Dr. Schroeder, was entitled “Civil Leaders of the Reformation.”

The Reformation Lectures were a study of contributions by Christian laypeople in the Reformation era. The history of the men and women around Luther and the Reformation presents a fascinating picture. Throughout his life Luther did not only associate with theologians and churchmen, but he also had many contacts with laypeople of all walks of life. There were relatives and friends in Mansfeld and Eisenach, associates and fellow citizens in Erfurt and Wittenburg, and individuals from other parts of Saxony and the empire. Many of them became ambassadors of the good news who spread the Gospel throughout the land. Each one furthered the Gospel in his own way, in government, in business, and in society, through art and literature, or by various other means.