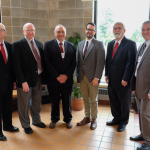 This year there were two presenters. The first lecture was given by Prof. Allen Quist of St. Peter, Minnesota. Prof. Quist holds a B.A. from Gustavus Adolphus College, an M.A. from Minnesota State University, Mankato, and B.D. from Bethany Lutheran Theological Seminary. He currently serves as a member of the Doctrine Committee of the Evangelical Lutheran Synod. Prof. Quist was Professor of Psychology at Bethany Lutheran College from 1968 to 1982. He served three terms in the Minnesota House of Representatives from 1983 to 1988. While in the Legislature, he served as Chair of the Social Services Subcommittee and as Vice-Chair of the Health and Human Services Committee. Prof. Quist was the author of numerous bills including the bill that created Minnesota’s Department of Jobs and Training. In 1994 he won the Republican party endorsement as a candidate for governor of Minnesota. Prof. Quist is the author of seven books, one of them being an unofficial best-seller with sales of over 10,000 copies. He is also the author of numerous articles in a wide variety of publications, and has been a frequent speaker at national conferences dealing with education policy. His recent publications include: Ten Truths About Evolution that Everyone Should Know, and Proclaiming the Truth of Jesus to a Post-modern World. Prof. Quist and his wife, Julie, live in rural St. Peter. They have 10 children and 42 grandchildren.

The second presenter was Dr. Daniel van Voorhis.Dr. van Voorhis received his B.A. in Theology from Concordia University, Irvine and earned his Ph.D. in History from the University of St. Andrews in Scotland. He is currently the chair of the department of History and Political Thought at Concordia University, Irvine. He is the author of numerous articles in fields ranging from Reformation polemics to contemporary issues in Religion and Politics. He is the co-host of the Virtue in the Wasteland podcast (a production of the League of Faithful Masks) as well as a speaking fellow for both the League of Faithful Masks and the 1517 Project. Dr. van Voorhis is currently co-writing a book with colleague Dr. Jeffrey Mallinson on Christianity and culture. His article “Who’s Afraid of the Enlightenment?” was accepted as a chapter in an upcoming work on the legacy of Western Civilization. Dr. van Voorhis, and his wife, Beth Anne, have been married for 11 years, and are blessed with two sons. He is a native of southern California.

The theme of the lectures was “Apologetics in Lutheranism.” The first lecture, given by Prof. Quist, was entitled “The Doctrine of Creation in Lutheran Apologetics.” The second lecture, presented by Dr. van Voorhis, was entitled “Lutherans and the Defense of the Faith.”