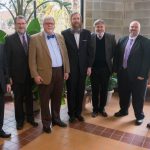 The Reformation Lectures presented the life and work of the three princes who ruled during Luther’s lifetime. God, through these men, provided the environment and political situation which made the restoration of the Gospel possible. They defended and protected the Reformation movement in its infancy. Great Lutheran confessors they were to a man.