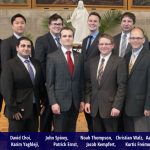 The Commencement Service for Bethany Lutheran Theological Seminary, which included both the assignment of calls and graduation of students, occurred on Wednesday, May 10, 2017 at 3:00 p.m. in Trinity Chapel. Prof. Adolph Harstad served as preacher, Pres. Gaylin Schmeling served as liturgist, the Rev. Herbert Huhnerkoch represented the Board of Regents, and Mr. John Baumann was the organist. The sermon was based on Romans 10:5–15 with the theme “It’s Better than Rocket Science and Brain Surgery, But Much Less Complicated.” Prof. Harstad explained from the words of Paul and Moses that both the Law and the Gospel are very clear and accessible to everyone. No one has to search above, below, or across the oceans to find either of them and learn what they mean. They are as close as our mouths and hearts when we speak and believe them. But Law and Gospel are also completely different from each other. Only one of them can bring God’s own righteousness to sinners condemned by the Law of Moses. The Ministry of the Gospel is not complicated. It consists of four things: God’s clear message of righteousness freely given through Jesus, a messenger with “beautiful feet” to deliver the message, an audience to hear it, and a “call” to proclaim it publicly. That’s not rocket science or brain surgery. It’s better and less complicated. The four men being assigned have the privilege of carrying out this wonderful work. They have “beautiful feet” as they run with God’s Gospel.

In this service, Professor Adolph Harstad was recognized for 26 years of faithful service to the seminary upon his retirement. He has led our seminary Old Testament studies and has distinguished himself as an author of several excellent commentaries.