Click each student’s name below to find out more information. Click the name again to hide their information. 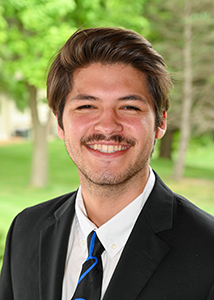 Peter Estrem Jr. was born to Peter and Flor Estrem and raised in the suburbs of Austin, TX. He attended public school for elementary school and middle school; afterwards, he was homeschooled for high school. Peter first began thinking about entering into the ministry during his confirmation classes. He received encouragement and guidance from his pastors at Hope Lutheran Church in Leander, TX. After graduating in 2018, Peter attended Bethany Lutheran College and graduated in 2022 with a Bachelor’s Degree of Arts in History. While at Bethany, Peter studied the Biblical languages Greek and Hebrew. He also participated in the fine arts programs offered at Bethany such as organ lessons, choir, band, and theatre. Peter enjoys spending his time drinking coffee, cooking, and exploring the outdoors. 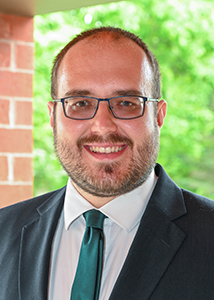 Graham Parsons was born to Fred and Julie (Daul) Parsons in Fort Worth, Texas. The Parsons family moved throughout his childhood and eventually landed in Hampton, Virginia where he met his wife, Rachel, while attending public high school. Rachel and her family attended Resurrection Lutheran Church (WELS) in Chesapeake, Virginia and Graham attended with them. His many questions about the Christian faith were answered by two faithful pastors and he was baptized and confirmed in 2011, his senior year of high school. In 2016, Graham and Rachel both graduated from Old Dominion University; Graham with a B.A. in History and a B.S. in Applied Mathematics, and Rachel with a B.S. in Psychology. He and Rachel were married in June 2016, and shortly after moved to Bowling Green, Ohio. There Graham gave increasing consideration to training for the pastoral ministry while attending Abiding Word Lutheran Church (ELS). He began taking Greek in Ohio and continued his language education at Bethany Lutheran College upon moving to Mankato in 2019. Rachel currently cares full time for their two children: Elise Grace (2019) and Victor Edric (2022). Graham has been employed as a software engineer for over 5 years now and his hobbies include reading, backpacking, and repairing his family’s two dilapidated cars. 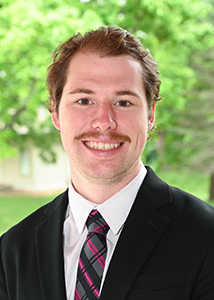 Skyler Hepler was born to Scott and Kristi (Prazak) Hepler and raised in Cottage Grove, Wisconsin. He became a member of the ELS in eighth grade when a friend invited him to attend confirmation class at Abiding Shepherd Lutheran Church. From there he became more involved with church through the youth group and later as a counselor at Camp Indianhead, WI (now Camp Rise). Skyler graduated from Monona Grove High School in 2016 before attending UW-Madison to pursue a degree in engineering. During his first semester of college, Skyler began feeling called to the ministry. He dropped out after one semester before eventually transferring to Bethany Lutheran College in the fall of 2018. At Bethany, Skyler served as Chairs of the Religious and Internal Affairs Committees on Student Senate and was the president of Bethany’s Organization of Student Scientists, X-Terrain, Ultimate Frisbee and Juggling Clubs. He also participated in choir and the musical all three years and spent many hours counting migratory raptors at the Bethany HawkWatch. He graduated with a Bachelor of Arts degree in Biology in May 2021. Skyler also met his wife Erin Kelly at Bethany on the winter Boundary Waters trip. Erin is from Brisbane, Australia where her family are members of Our Redeemer Lutheran Church. She is currently enrolled in Bethany’s Clinical Mental Health Counseling Graduate Program. In his free time, Skyler enjoys playing ultimate frisbee and spending time outside birding and herping. 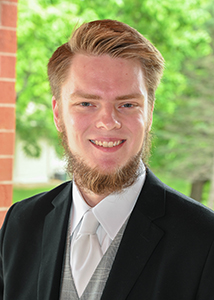 Caleb Strutz was born to Nathan and Elizabeth (Wierschke) Strutz in La Crosse, WI. He was raised in Galesville, WI and Verona, WI, attending homeschool and St. Paul’s school in the former and Our Redeemer school in the latter. After attending Lakeside Lutheran High School, he went on to Martin Luther College in New Ulm, MN and graduated with a Bachelor of the Arts in Classical Biblical Languages and a minor in Spanish. During that time, he was involved with Forum and spent a summer abroad in Argentina. There he met his wife, Brianna Asik, and the two married on April 19, 2020, during the midst of COVID lockdown. Honeymoon plans to Argentina were foiled, so the two spent some of their first weeks of married life house-sitting a chicken farm. They welcomed their daughter, Lydia Magdalena, into the world on November 11, 2021. She continues to grow at astonishing speed. This year, Brianna will graduate from MLC in December and the two are Resident Assistants at the Beacon Campus Ministry. Caleb has a special interest in Hebrew, the liturgy, and BBC mysteries.

Caleb VonDeylen was born to Marc and Monique (Archer) VonDeylen and raised in Friendswood, Texas. He went to Lord of Life Lutheran School up to the eighth grade after which he attended Luther Preparatory school in Wisconsin and then Martin Luther College in New Ulm, Minnesota. He graduated from there with a Bachelors of Arts degree. At Martin Luther College Caleb was involved in cross country, choir, intramural sports, and track and field. It was at the college that he met his wife, Sara. Sara graduated there with an early childhood degree and they got married shortly after her graduation. They have been happily married for over three years and have two children, Madilynn Hope VonDeylen, who turned two August 2nd, 2022, and Ezra James VonDeylen who was born August 2nd, 2022. Sara is a stay at home mom and Caleb is a waiter and bartender at Olive’s in Mankato. Aside from studying and serving people he enjoys running, games of any sort, and spending time with loved ones.

Joel Hansen has been working with teenagers since he was one himself. Joel graduated from Wisconsin Lutheran College in 2003, and has since served as a teacher, staff minister in Green Bay, and program director at Camp Phillip. He is currently serving as the staff minister of youth at Bloomington Living Hope Lutheran Church. He is thrilled to have continuous opportunities to travel along-side God’s people as they live through their ever-changing adventures. Joel’s wife, Rachel, graduated with a teaching degree from Martin Luther College. Joel and Rachel have four children: Lucy, Judah, Caleb and Moses. These children keep the dinner table exciting, and bring their parents a special kind of joy. Joel has a large hobby collection. He enjoys roasting his own coffee (and drinking it), playing soccer and coaching it, basketball, disc golf, Star Wars, woodworking, reading, knitting and crocheting, and loves playing (and collecting) board games. One of his favorite hobbies is playing guitar and writing spiritual songs.

Matthew Lehne was born to Tim and Teresa Lehne in St. Paul, Minnesota, and was raised in Lino Lakes with his two younger sisters until it came time for him to attend school. His family moved to Burnsville, Minnesota, where he got a third sister and attended Good Shepherd Lutheran School from kindergarten to eighth grade. He received his high school education at St. Croix Lutheran High School in West St. Paul, Minnesota, where he decided that he wanted to become a pastor. He went to Martin Luther College in New Ulm, Minnesota, and graduated with a Bachelor of Arts. After taking a few years off, he entered Bethany Lutheran College for one year to refresh his skills in the biblical languages and is now attending Bethany Lutheran Theological Seminary. Matthew likes to travel and go for walks in nature. He is also a fan of storytelling and likes to spend his free time watching films.

Cody Anderson was born to Keith and Lisa (Homann) Anderson who are from Colfax, Wisconsin. He attended St. Paul Lutheran School in Bloomer, Wisconsin from kindergarten to 8th grade. After attending Bloomer High, he graduated and at first pursued a career as a Game Warden/Park Ranger at UW-Stevens Point. With the help of the campus ministries there, he then transferred to Martin Luther College in New Ulm. He graduated from there in 3 years with a BS in Educational Studies and a minor in classical languages and Theology in the summer of 2018. On August 8th, 2020, he married his wife, Taylor (Thur) Anderson. In May of 2021 she graduated from UW-Stevens Point with a BFF in Interior Architect and Design. His hobbies include being an avid hunter and fisherman and he cannot wait to be a called worker like his Grandmother, Hildegard (Kunkel) Homann, class of ’61 at Concordia University Chicago.

Caleb Helmen was born to Tim and Lori Helmen and was raised in Minneapolis. He was homeschooled throughout his childhood. During high school, he enrolled in PSEO courses through the University of Northwestern-St. Paul, Concordia University-St.Paul, and North Central University. He enrolled at Bethany Lutheran College in the Fall of 2015 and graduated with a B.A. in Sociology as well as minors in both Communication and Philosophy. While at Bethany, he was active on the Speech Team as a debater, as well as being involved with choir, theater and Student Senate. On Bethany’s speech team he met Emily, his debate partner, whom he married in July of 2020. He enrolled at BLTS in 2019. He enjoys spending time with his wife, friends and family, as well as baseball and traveling.

Max Kerr was born to Max and Darlene Kerr and raised in Tucson, AZ. He went to public elementary and high school. He graduated from Flowing Wells High School in 2011 and attended the University of Arizona for two years and the University of North Carolina School of the Arts for one semester. Max diligently studied violin performance. Max had a change of heart and decided to enter the public ministry in 2014. He moved to New Ulm, MN and attended Martin Luther College from 2014-2019. There he rigorously studied German, Latin, Greek, Hebrew, history, philosophy, and theology. Max met his wife Danica in 2016. They were married in summer of 2017. Danica graduated from MLC and went on to get her Master’s in Mathematics Education from Western Governor’s University. Danica is currently teaching upper level math at Lakes International Language Academy. She enjoys playing the piano for church. The Lord has blessed the couple with a daughter: Aurelia Grace Kerr, born on July 8, 2019. Together they live in Saint Paul, MN. They enjoy walking, hiking, music, and seeing all that Saint Paul has to offer. They also enjoy serving at their church together and getting to know other people.