with the theme of

“The Cost of Confessing: Luther and the Three Princes”

Lecture One: Luther and Frederick the Wise

Check out this video made by our graduates of 2016. 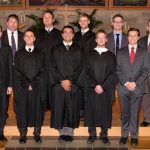 The Commencement Service for Bethany Lutheran Theological Seminary, which included both the assignment of calls and graduation of students, occurred on Wednesday, May 11, 2016 at 4:00 p.m. in Trinity Chapel. The Rev. Craig Ferkenstad (Norseland and Norwegian Grove Lutheran Churches, Saint Peter, Minnesota) served as preacher, Pres. Gaylin Schmeling served as liturgist, the Rev. Herbert Huhnerkoch represented the Board of Regents, and Mr. John Baumann was the organist. The sermon was based on Hebrews 12:2–3 telling the candidates and vicars that as they go forward they are to keep looking to Jesus who is the Author and Perfecter of our faith. We look neither to the world nor to popular opinion but keep looking to Jesus as we proclaim the Law and the Gospel of reconciliation. We do so until the day when we see Him face-to-face in the heavenly home which He has prepared for us.

The seminary commencement service will be held on Wednesday, May 11, 2016, at 4:00 p.m. in Trinity Chapel. The Rev. Craig Ferkenstad will be the preacher, President Gaylin Schmeling will serve as liturgist, and the Rev. Herbert Huhnerkoch will represente the Board of Regents. The following will graduate from the seminary with a Master of Divinity degree: Matthew Behmer, Jeffrey Hendrix, Joshua Mayer, Daniel Ruiz, and Andrew Soule. 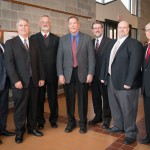 The Reformation Lectures were a study of Lutheranism’s relationship to the arts. The lectures explained the influence of Lutheranism on the visual arts, history, and literature. Lutheranism was open to the visual arts, beautifying our worship in contradistinction to the whitewashed churches of the Reformed; it has given direction to the study of history as seen in the example of the Magdeburg Centuries; and it has affected our literature. Lutheranism has touched every aspect of our Christian vocation.